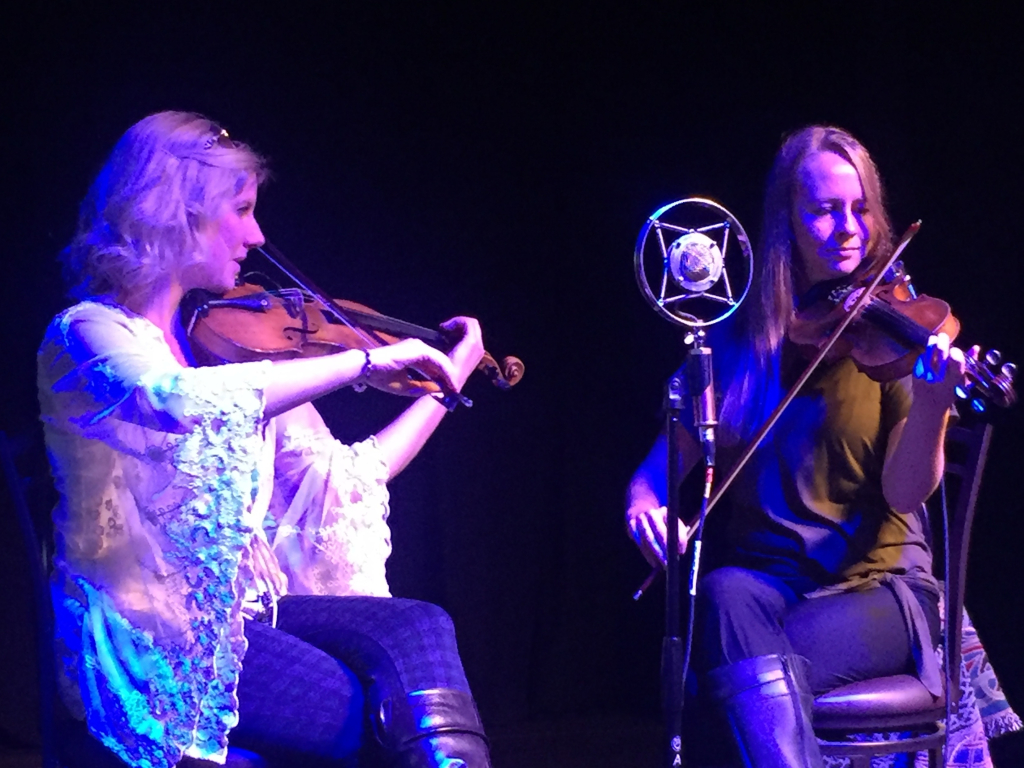 The Reno music scene is one characterized by a wide diversity of musical genres and a strong community of professional musicians. From jazz to rock, Classical to Scottish music, options abound when it comes to catching highly talented acts. For Celtic music, two hotspots boast the best in fiddling, Irish flute, dulcimer, bodhrán, and more, Ceol’s Irish Pub and the Mountain Music Parlor.

Many renowned performers from all over the country have attended jam sessions at these establishments. Among these are Holly Sternberg and Vanessa Porter, the talented musicians behind the duo Fiddlers2. Together, they’re breathing new life into traditional Celtic fiddle tunes. Fresh from a tour of Scotland and a new CD release, they sat down with us to discuss life and music in the “Biggest Little City in the World” and beyond.

From Neuroscience to Fiddling

Holly Sternberg grew up in Northern California and attended college at UC Davis where she studied neurobiology, physiology and behavior. But she longed for a quieter life, free from long commutes and hours spent in traffic.

After a stint at Butte College near Chico, she learned about a new neuroscience program at the University of Nevada, Reno. Applying to the tier-one university was a must, and she became one of the first graduating students from the program.

She also found a local music scene where she could thrive and continue to hone her mastery of Celtic tunes. As a result, she gained the confidence to leave neuroscience behind and devote herself entirely to music, and she’s never looked back.

From Classical to Celtic

Originally from Indiana, Vanessa relocated to Reno to study Classical Music performance at UNR where she received a Master’s Degree in performance. Over the years, she has played with a variety of local orchestras including the Reno Philharmonic Orchestra, the Reno Chamber Orchestra, and the Nevada Ballet. She also runs a thriving violin studio and performs house concerts across the Western United States.

But she longed to move beyond her Classical music roots. Fortunately, the Reno-Sparks-Tahoe music scene has helped her do this.

Besides music, what’s one of the biggest draws for her to the area? The wide variety of activities in close proximity to the city: “Reno is close to everything, from Northern California to Tahoe, Truckee to Yosemite. There are also the Davis and Sacramento areas as well as the Bay Area. There are endless opportunities not only for travel and leisure but also for finding great gigs. I even play occasionally with the Las Vegas Philharmonic, which is a quick one-hour flight from Reno, although I much prefer the gorgeous drive.”

The Birth of Fiddlers2

After meeting at weekly Irish jam sessions at Ceol’s, Vanessa and Holly quickly connected over their love of music, travel, and the Reno-Tahoe area. They started playing together at a variety of music festivals including the Lark Camp in Mendocino, and Fiddlers2 soon emerged.

This summer, they toured Scotland along with a handful of other musicians who play at Ceol’s jam sessions. From Edinburgh to the Isle of Skye, they enjoyed sharing their music with locals and were greeted with appreciative “cowboy songs” from Scottish musicians in return.

This summer also saw the release of Fiddlers2’s first album Mirrors of Elsewhere: Scotland (2019), a unique interweaving of Scottish and Cape Breton music. The album pays homage to Celtic music’s heritage and presents new perspectives on the music. It also showcases the duo’s immense talent and musical prowess.

What does the future hold? The duo continues to bring their stylings to jam sessions, house concerts, and festivals across the West Coast and beyond. As for future trips? They plan on visiting Ireland and then Northwestern France to explore the rich diversity of Celtic-influenced music from these regions. Their continued musical journeys will provide inspiration and material for future albums.

Interested in learning more about the Reno music scene? Or, maybe you’ve got questions about relocating to the area? Contact us today to find out what’s happening in Northern Nevada and why you want to be here.