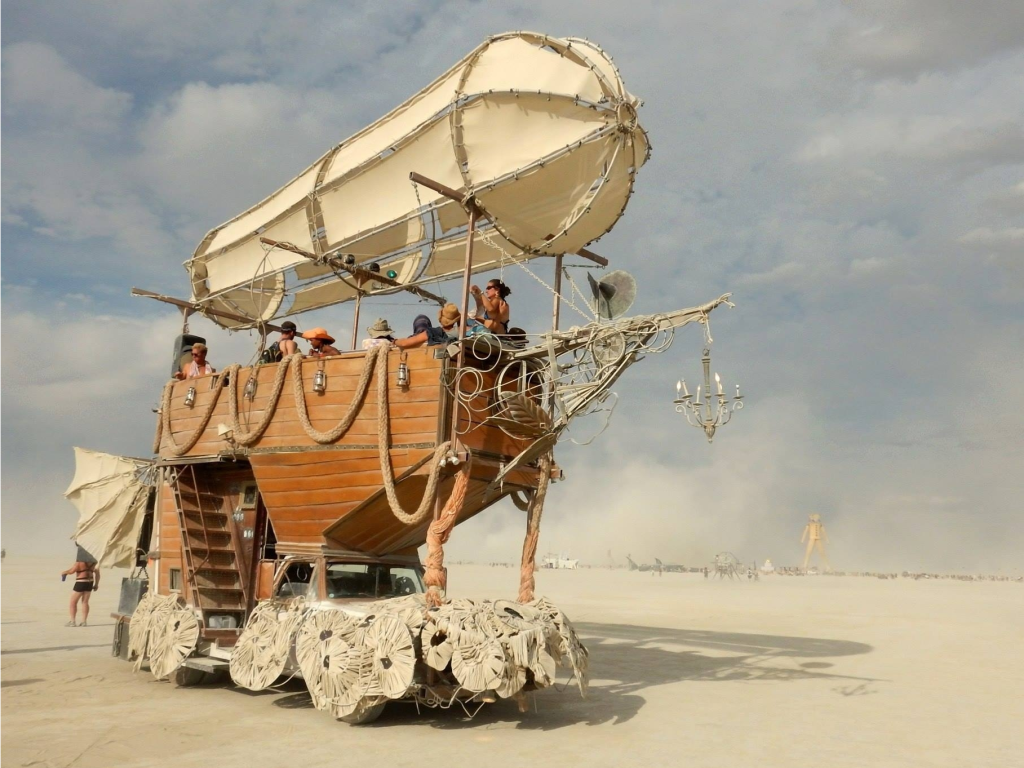 Burning Man’s annual economic impact in Northern Nevada remains impressive by any standard. Since 2013, a minimum of 70,000 people have participated in the event each year. Based on conservative estimates, it pumps more than $60 million into the local economy. This includes $50 million from participants of the event and another $10 million from the Burning Man organization that spearheads it.

And that’s just the tip of the iceberg when it comes to how Burning Man has (and continues) to transform the landscape and the culture of the Truckee Meadows.

Once upon a time, the residents of Reno-Sparks-Tahoe didn’t look very kindly on Burners or the week-long festival in the Black Rock Desert. Oh, but how times have changed!

According to John Slaughter, former Washoe County manager, “This event has a huge, month-long, positive impact on our local economy. Our stores, restaurants, gas stations, and car washes see an incredible influx of traffic, providing a great boost to the Northern Nevada economy.”

The festival celebrates creativity, artistic expression, diversity, and community, and revolves around 10 key principles now embraced by many local businesses. And Burning Man art gets upcycled by Reno, surrounding communities, and cities around the world.

Resonating with the Burning Man Ethos

Doug Erwin, vice president of Entrepreneurial Development at the Economic Development Authority of Western Nevada puts it this way, “Burning man has become more well received in the community over the years, due to both the economic impact and to the broader impact on the arts and culture of the community. I think the ethos of Burning Man aligns with Nevadans’ independent spirit and self-reliance. ”

The explosive growth of Burning Man has coincided with a renaissance in Reno driven by economic diversification. This is reflected in steep economic growth indicated by the creation of more than 50,000 new jobs from 2015 to 2019 alone. And if you’re still skeptical about the Burning Man effect, consider this. Every year in late August, the Reno-Tahoe International Airport transforms into the 66th busiest airport in America. Airport crowds during this one week surpass those of Thanksgiving, Christmas, and other major holidays.

Google and Tesla are now regular fixtures of Northern Nevada, as well as Panasonic, Switch, Zulily, and many more corporations and startups. Entrepreneurship and innovation now represent fundamental threads woven throughout the city’s fabric. Is it mere coincidence that creativity and innovation are principles central to the Burning Man experience?

Both Google and Tesla have deep roots in Burning Man. Elon Musk famously spends time at Black Rock City,  and now there’s a state-of-the-art Tesla Gigafactory near Reno. His cousin, Lyndon Rive, visited, too, and found the inspiration to create Solar City. There’s even a Google Burning Man link. Larry Page and Sergey Brin (founders of Google) invented Google Doodle after Burning Man and reportedly attend often. They even encourage employees to participate by providing a complimentary shuttle bus to the event.

Other Silicon Valley giants that attend Burning Man include Eric Schmidt (executive chairman of Google Alphabet), Justin Rosenstein and Dustin Moskovitz (founders of Asana), Garrett Camp (co-founder of Uber), Alexis Ohanian (executive chairman of Reddit), and Drew Houston (CEO of Dropbox). According to Moskovitz, Mark Zuckerberg (CEO of Facebook) even helicoptered into the event for a day to serve grilled cheese sandwiches.

There’s a reason many people consider Burning Man an extension of Silicon Valley. Not only does Burning Man draw creatives and tech talent to Nevada, but the atmosphere of the event is conducive to experimentation and innovation. As Marnee Benson puts it, “Time in Black Rock City translates to real, impactful innovation. Time on the playa surrounded by people both connected — to time, place, and community — and disconnected — from outside schedules and devices — affords creative minds the freedom to explore and question.”

One benefit of the festival being held within a few hours of Reno, is that people come from all over the world to attend, many of which have never been here before, so it draws people to the region who may never had a reason to visit previously. The event provides great exposure to all that the Reno Tahoe area has to offer, and many that visit for Burning Man, extend their vacations in order to explore the many other things to do and see in the area. Some may even stay to take advantage of the great lifestyle, community, and careers!

You’ll also find plenty of Burning Man art and murals lining the streets of the neighborhood (as well as other parts of Reno). Reno’s  Discovery Museum houses a giant ichthyosaur skeleton replica that came from Black Rock City. The Reno-Tahoe International Airport redecorates for Burners, even offering a welcome table for festival attendees. And there are numerous sculptures throughout the city that came directly from the Burn including the 12-foot high “BELIEVE” and 40-foot tall humpback whale and mother known as “Space Whale” in City Plaza. There’s even a Playa Art Park in downtown Reno to showcase many more of these desert-inspired creations.

As Erwin notes, “We have so many amazing works of public burning art in town and it just becomes part of the fabric of the community. I kind of expect if I’m going to go downtown for an event there’s are going to be art cars.”

You’ll also find so-called “Maker Spaces” such as The Generator where new art projects get assembled and prepared for the playa. There’s the Morris Burner Hostel, a community space and “Burning Man-inspired housing facility,” and don’t be surprised if you see art cars driving around the area. Many have become a semi-permanent feature of the area.

Northern Nevada continues to grow and flourish as a result of the Burning Man effect. From public art displays reshaping the built landscape to food trucks, Burner-inspired stores to Maker Spaces, Reno’s renaissance is marked by creative, eclectic Burners who are redefining what community means.

Interested in learning more about Burning Man? Let’s chat! Contact us today to find out what’s happening in Reno-Tahoe and why you want to be here.

4 thoughts on “The Burning Man Effect on Northern Nevada”